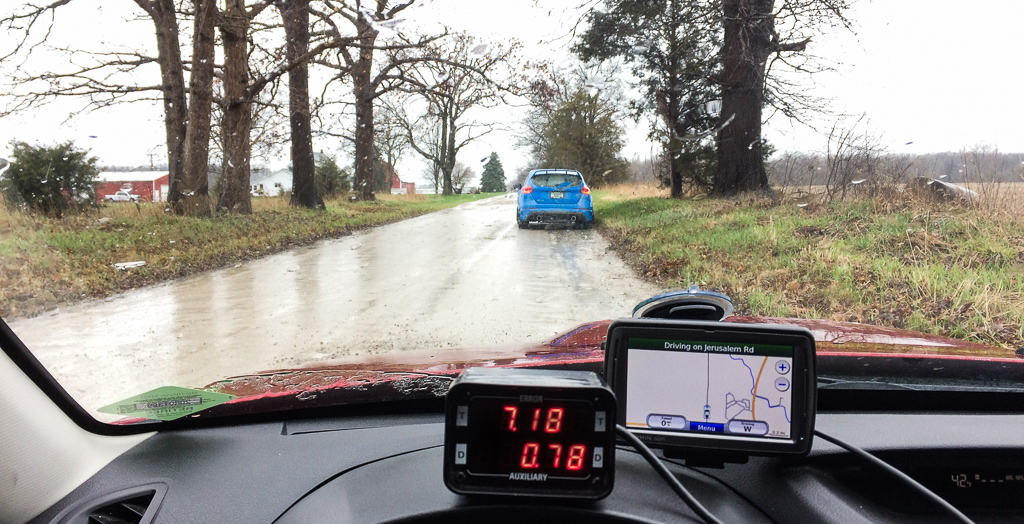 'Twas a very gray and rainy Saturday in south central Michigan. A perfect day for seventeen teams to tackle the wet back roads of Detroit Region's second TSD road rally of the year, Twilight Tour. Organizers Ken and Dennis Wiedbusch put on another fine rally, enjoyed (presumably) by all. The rally was mileaged on a 60 degree day with dry roads. Needless to say, the wet conditions with temps in the 40s provided endlessly entertaining distance measurement opportunities throughout the rally for equipped and wheel-driven odo limited teams. Zeroes were hard won and infrequent.

First overall and in limited class was the always excellent pairing of Daniel Harkcom and Greg Lester. The duo won the rally outright with just 20 points for 15 controls under difficult condition, an excellent performance - and beating the first equipped class finisher by 2 points!

Mark Henderson and Aaron Conner celebrated their return to Detroit Region rallying after several years' absence with first in equipped class and second overall win, collecting just 22 points for the 15 controls. Pretty fine outcome for what most would think should have been a bit of a rusty return. Ron Johnstonbaugh, up from Ohio and whom we haven't seen recently, came up with his grandson Caleb Abbott to nail second in equipped with 26 points. John Fishbeck and Laura Dawson pulled out a third with a 34.

Stock class was won handily by last season's stock class and region overall champion Tristan Koivisto and his driver Ryan Vindua. They took the class victory with 99 points, for an average of just under 4 seconds error per control - a highly respectable finish given the conditions. John and Diane Thomson took second to fill out stock class.

Novice class saw an outstanding win from recent Detroit Region rally school attendees Micky Monroe and Alexander Rink, who incurred only 194 points for the 15 controls in their first event. That's an average of under 8 seconds variance per control for the 15 controls - well done Mickey and Alexander! Raven Rotsaert, Alex Skedel Chris Zimmerman pulled out a second in class, followed by Patrick Burke and Joseph Kennedy.

As always big thanks to all those who contributed their time and skills to put on another excellent Detroit Region road rally. See ya at Lazy Daze on Saturday, July 20!